Dr. Noel Johnson was a visiting fellow at the Sorbonne (PSE) in Paris for several weeks in Fall 2019. He spent his time there working on new research on “Markets & Minorities: Jewish Persecution and Market Access, 1100-1850” (with Hillel Rapoport). In Paris, Dr. Johnson also presented material from his recent book (with Mark Koyama) Persecution and Toleration: The Long Road to Religious Freedom to the Law and Economics (CRED) group at Paris 2. He also delivered a keynote on the material in the book at the Conference on Understanding State Capacity in Manchester, UK. In December, his paper on “Negative Shocks and Mass Persecutions: Evidence from the Black Death” (with Remi Jedwab and Mark Koyama) appeared in the Journal of Economic Growth. In the Fall Dr. Johnson also traveled to Bocconi University in Milan to present his work on “The Long-Run Effects of Land

Redistribution: Evidence from the French Revolution” (with Raphael Franck and Theresa Finley). Dr. Johnson also published an op-ed in Newsweek in Fall 2019 on what historical witch trials can teach us about rule of law (or its absence) today.

In early Spring Dr. Johnson traveled to Tulane University to deliver a talk on his research on “Pandemics, Places, and Populations: Evidence from the Black Death” (with Remi Jedwab and Mark Koyama). He also went to Auburn to present his research on “Markets & Minorities: Jewish Persecution and Market Access, 1100-1850.” Then Covid-19 hit, which was a bit of a challenge given that he was teaching two classes at the time and has two young children who lost their childcare and a spouse who also had to continue her work. Nonetheless, along with his supportive coauthors, during this time Dr. Johnson wrote a survey paper on “Medieval Cities Through the Lens of Urban Economic Theories” (with Remi Jedwab and Mark Koyama), which will be published in Regional Science and Urban Economics. He also wrote a short piece for Voxeu on his work (with Remi Jedwab and Mark Koyama) on the Black Death and Jewish Persecution. Finally, along with Remi Jedwab and Mark Koyama, Dr. Johnson has dedicated much of his time recently to putting together a symposium in the Journal of Economic Literature on “Pandemics and Economic History.” His specific contribution is to write a survey paper on what the fourteenth-century Black Death can teach us about pandemics today. 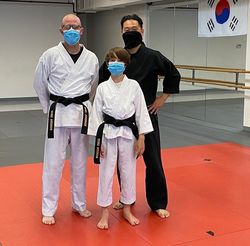 return to faculty and staff